Rabbi Daniel Cavalier has been serving as our Rabbi since 2013. Born and raised here in Los Angeles,
Rabbi Cavalier graduated from YULA and Ner Israel Rabbinical College in Baltimore, Maryland where he
received his B.A. in Talmudic Law, while pursuing his interest in Psychology at University of Maryland.
Rabbi Cavalier received his semicha (rabbinical ordination) from the Rishon Letzion and Chief Rabbi of
Israel, Rabbi Mordechai Eliyahu, zt”l, and his Master’s Degree in Jewish Philosophy from Darchei Hora’ah
Institute in Jerusalem, Israel.
A noted educator known for his warm and engaging style, Rabbi Cavalier has been involved in teaching
and outreach of all ages over the past 15 years. He has taught men and women in various yeshivot and
seminaries in Israel, was a frequent lecturer for the IDF (Israel Defense Forces), and has taught
elementary school. Whether teaching young or old, Rabbi Cavalier seeks to inspire his audiences to a
greater connection to Judaism, a deeper understanding of Torah, and a more fulfilling life.

After living in Israel for close to 10 years, Rabbi Cavalier came back to LA to teach, inspire, and give back
to the community that gave so much to him. Since his return, he has served Young Sephardic
Community Center as both rabbi and chazzan. He feels very fortunate to be leading YSCC, which has
under his guidance become a vibrant, growing, and vital community in Los Angeles.

As a trained Sephardic chazzan, Rabbi Cavalier blends melodies and customs from diverse traditions
including Egyptian, Syrian, Moroccan, Spanish, French and Ashkenazic. He attempts, through his
chazzanut, to unify the many different cultures and backgrounds in the community.

He lives here in Pico-Robertson with his wife Rachel, and their four beautiful children. Ariel grew up an all-American kid in an Israeli home full of intense Jewish culture but paid little attention to religion after his Bar Mitzvah. He started asking life’s existential questions at age 25, leading him back to Torah, a love of learning and extended Shabbat stints at almost every shul Pico paradise had to offer. Ariel found a home in YSCC, a warm and vibrant community that naturally blended the various elements of Jewish life he’d grown to love, while serving as his support group of Sephardi men who’d married Ashkenazi women. Ariel currently serves as secretary on YSCC’s board and couldn’t be prouder to give his time to this large, extended family that shines as a leader of Jewish unity and celebration.

My name is Gabriel Saadat. I was born and raised in Los Angeles. I grew up in a traditional Jewish home and when I was in college I started my path in becoming more observant. In my path I found yscc. It happened to be the most loving, welcoming, and comfortable place to be. It helped me grow and feel comfortable on the path I was on. Now BH I am married with children and continue to grow in my Judaism and have a shul I call home.

My name is Steven Bohbot and I identify myself as a French Moroccan. I went to Le Lycée Français de Los Angeles until the 5th grade where my journey of Torah and self reflection began. The first philosophy I learned in my Jewish studies was to treat others how you would like to be treated and we have survived through thousands of years of persecution through unity and firm belief in the Torah and its values. As President of YSCC, this is the lesson that we as a whole embody. We are all one big family and treat each other as such.

Jonathan Dekel was born and raised in Los Angeles and is a graduate of Shalhevet High School.  Jonathan’s mother is a first generation American and his father, who was born in Baghdad, moved to Los Angeles from Israel.  Jonathan grew up with a blend of different cultures. From pasta and pizza to Kubah and Tibit, Jonathan’s home was filled with the best of both worlds.

Jonathan is an attorney and has lived in the Pico Robertson area with his amazing wife, and three beautiful kids for the last eight years.  From the day it opened, YSCC has been Jonathan’s home away from home on Pico.  Jonathan fell in love with YSCC from day one because it combines the warmth and feeling of a Jewish family with the beauty of Sephardi tefilah.  He is so proud to be part of YSCC’s energetic and growing community. 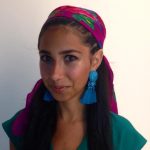 Daphna was born and raised in Los Angeles. Following high school she studied in both Israel and New York, but moved back after six years when she met Michael, her (amazing) husband, and current treasurer of YSCC. When Daphna moved back to LA, she had personally experienced the open arms and welcoming atmosphere of the YSCC community. She cherishes the shul, and now thinks of it as a second home and family to her. She especially loves YSCC’s dedication to bringing Jews closer to yiddishkite. As event co-chair, Daphna plays a role in event coordinating and marketing. She helps plan holiday events, shiurim, and fundraisers. She is dedicated to the growth and achdut of YSCC, and is open to any and all ideas from congregants.